One of the many delights of our trip to Boston was watching Harper play with her uncle Matt, whom she hasn’t seen since last Thanksgiving. The last time we got together, Harper’s favorite game was GoToSleep/WakeUp: Harper would tell Matt to go to sleep, which he obediently did, and then very quickly (and very loudly), tell him to wake up, which he did with an exaggerated gasp and a fair amount of thrashing around. Much giggling ensued. This time around, the game du jour was “Staring Contest,” which is exactly what it sounds like. Harper got better as time went on, but her giggles were really no match for Matt’s giant-eyed stares.

I just finished reading Donald Miller’s book, A Million Miles in a Thousand Years, in which he suggests that the same things that make a good story are the things that make a good life. In particular, he says that every good story – and every good life – has a “memorable scene” or two. I thought of that on Tuesday night, our last night in Boston. We’d met Matt for dinner after work, and as we were leaving the restaurant, we passed a man playing a saxophone on the corner. “Here you go,” Matt said to Harper. “Dance to this!” She stopped and looked at Matt, and then at the saxophone player, but didn’t move a muscle.

The saxophone player saw her and switched to a jazzy rendition of “Wheels on the Bus.” That didn’t elicit any response from her, but Lynn did start to sing along. Then, finally, Harper began to bounce a little in the knees, and pretty soon she was doing a subtle little move with her elbows and her shoulders, a dance that went perfectly with the mellow street-corner jazz. We all cheered, and she grinned at Matt, who gave her a dollar to put in the saxophone player’s case. Then she waved goodbye and we went home, where Matt got out his guitar and we all had a dance party in the living room. 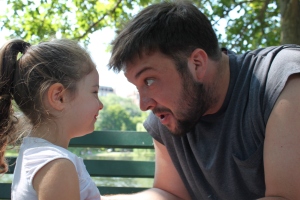